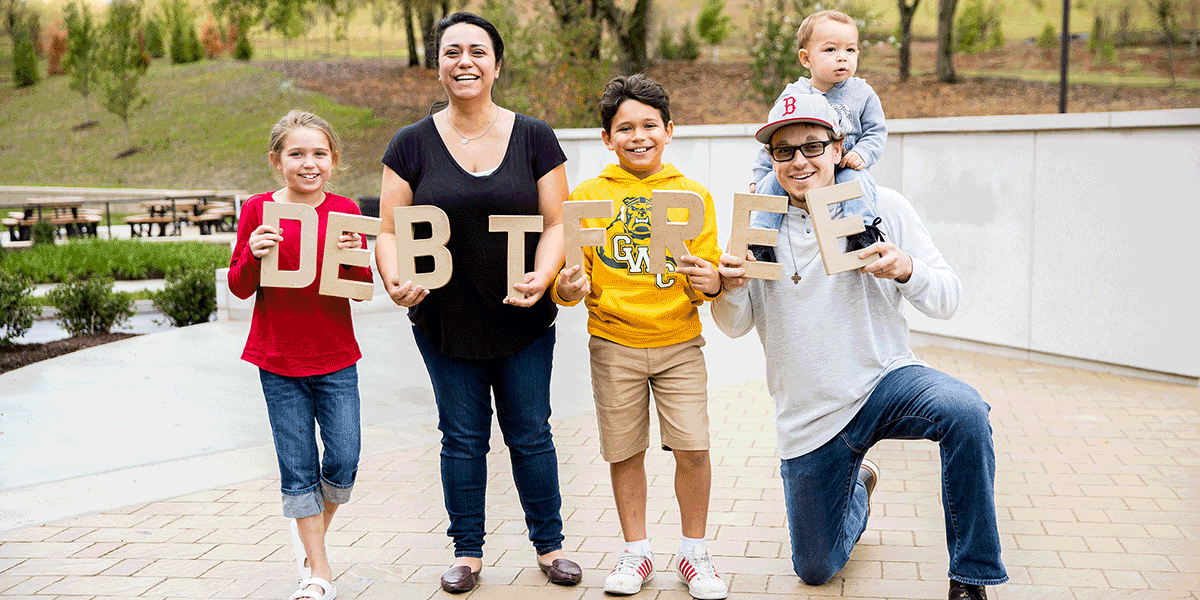 Getting out of debt is hard. Really hard. And that makes what the Gould family did in just 12 months seem like a miracle. They paid off more than $54,000! Want to know how they did it? Rice and beans, baby. Well, enchiladas too. (More on that later.)

Whether you’re knocking out debt or already giving outrageously in Baby Step 7, the Goulds’ story will help inspire and motivate you to stick to it and kick debt to the curb once and for all.

How the Goulds Lost Their Luster

Like many couples, Travis and Charissa Gould weren’t always on the same page about their finances. They kept separate checking accounts, avoided talking about bills, had trouble sticking to a budget, had a hard time saying no, and put their home renovations on a credit card in an effort to sell their house. It all led to racking up dangerous amounts of debt.

When they sat down to pay their bills, they never had enough in their account to cover them all. They weren’t making any headway on their debt, and the pressure was mounting.

“We were making pretty good money,” says Charissa, “and we couldn’t seem to get anywhere.”

Even with Travis working two jobs, the Goulds were sinking in debt, and they got to a point where they couldn’t even afford groceries or the gas to get to town. During that time, money fights and miscommunications plagued them, making matters worse.

Charissa and Travis were breaking, and they knew they wouldn’t make it if they didn’t fix their $54,023.73 problem.

Travis’s dad first introduced them to Dave Ramsey’s Financial Peace University years ago, but they just couldn’t get themselves to commit. Then, more than $54,000 in debt and desperate, they thought about trying it again.

Charissa says her employer, Mr. Cooper, gave them the sign they needed: “My company offered SmartDollar, so that really was our catalyst to say, ‘Okay, we’re ready to go.’”

And go they did! Saying that things clicked when they started using SmartDollar is an understatement. They were game on! They became more open and honest with each other, combined their checking accounts into one, and started knocking out debt.

“I like that it was so easy to use,” Charissa says. “You could . . .  watch the videos that correlated with whatever step you were on, and it gave you more information.”

They started to see the domino effect of the debt snowball method, so they doubled down. They sold a car. They started a side hustle. With the future of their family as their focus, they did everything they possibly could to fix their family tree.

Needless to say, their snowball rolled—and rolled fast. The Goulds took down $54,023.73 in only 12 months. Just one year! That’s incredible.

Practicing Peace With Their Money

You gain an amazing amount of peace and perspective when debt is no longer weighing you down. The future is brighter, you’re more hopeful, and you have a vision going forward. The Goulds know this firsthand: They’ve stopped having money fights, taken control of their finances, and paved a way for their family’s future.

“Our communication is different,” Travis says. “We actually talk about our money now.”

Another thing they’re saying? The word no. When they’re tempted to buy stuff that doesn’t fit in the budget, they shut it down with an empowered nope. And their kids are picking up on it too. Using the envelope system, they’re learning as a family how to tell their money where to go, how to save for things, how to give outrageously—and how to reject debt at every turn.

“After SmartDollar, we do have a plan. It changed our parenting—helping our kids go down that same path so they don’t make mistakes that we made,” Travis says.

The Sacrifice Is Worth It

Millions of families are still stuck in a cycle of debt, but the Goulds aren’t one of them anymore. And they would be the first to tell you that the feeling of freedom that comes with being debt-free is more than worth the sacrifice it takes to get there.

They even have some advice and encouragement for you: “It sounds scary and it will be scary, but face your fear about it and just go with it. Do it. It’s worth it. You can’t give yourself or your children a better present than financial stability. It saved our marriage and saved our family.”

Check out this video for more of their story and see how SmartDollar has impacted their family.

You can do this!