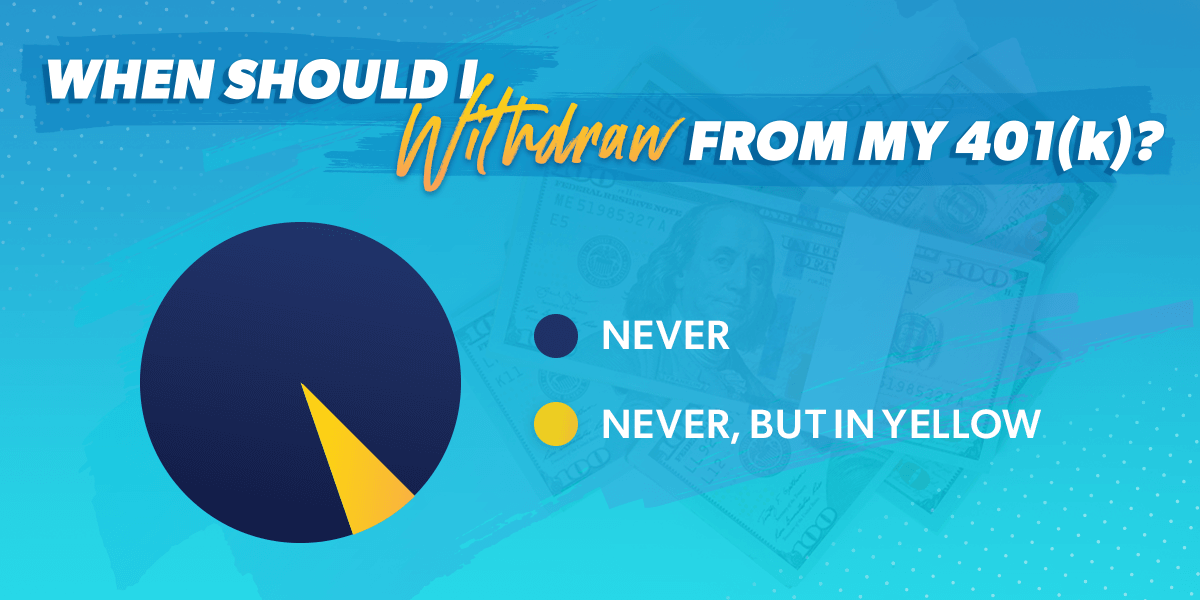 This year has been a really tough pill to swallow for a lot of people. It’s been a curve ball, a wrench in the gears, a rock and a hard place. Some of us were making real progress toward our money goals. And then BAM! The pandemic hit, and things hit the fan. A lot of people panicked while money (and health) questions popped up at every turn. Early on, we recommended you temporarily stop your debt snowball, stockpile as much cash as you can, and focus on your Four Walls—food, utilities, shelter and transportation. But even with that advice, there are still a bunch of other things you need to watch out for. One of those things is the temptation to withdraw early or borrow from your retirement.

It’s been one of the biggest questions we’ve been asked over the course of the last few months: “Should I withdraw from my 401(k)?” Of course, it’s an important question to ask—there’s a lot to consider right now. But while that money may be tempting to tap into for a short-term fix, and while recent legislation makes it easier for you to do it, we’re here to tell you that it’s a downright terrible idea.

Just because the government makes something possible doesn’t mean you should do it. Case in point: the CARES Act. For all the good it’s done to provide some relief in certain areas, it’s also made it easier for you to fall into traps like borrowing and withdrawing from your 401(k). How? Let’s break it down.

All this means is that employees can take money out of their retirement with more “grace.” Typically, there’s a 10% penalty for early withdrawals, as well as income taxes on what you take out. Not so with this addition to the law (until December 30, 2020)1. But as always, the long-term consequences of early withdrawals are pretty bad. Let’s take a closer look.

Should You Withdraw From Your 401(k) Early?

Unless you need the money to avoid bankruptcy or a foreclosure or you’re legitimately ready to retire, the right answer is a resounding NO. But why? First and foremost, you need to remember that if you withdraw from your 401(k), you’re kissing all the benefits of future compound interest goodbye. This isn’t an “a bird in the hand is better than two in the bush” sort of situation. It’s stealing from your future to satisfy a short-term cash problem, which is solvable in other, more cost-effective ways. And that’s an understatement.

As with anything related to compound interest, the younger you are, the more you have to lose. The longer you keep that money invested, the more it will grow. Even if you don’t have all that much tucked away for retirement right now, whatever you have now represents a much greater number later.

Let’s say Hannah is 30 years old and has $10,000 in her 401(k). The pandemic hits, and she loses crucial hours at work as a result. She withdraws all $10,000 from her retirement to make sure she can get through the next six months of uncertainty hopefully unharmed. After all, the CARES Act made it so she doesn’t have to pay the usual 10% penalty (that’s $1,000). And she only has to pay income tax, which she can spread out over the next three years1. Good for her, right?

Flash forward to when Hannah is 67 and wanting to retire. After 37 years with an 11% average annual return and no additional contributions, that $10,000 she took out at 30 could’ve been worth $574,814 at the time of her retirement. But instead, she has to keep working into her 70s because she can’t afford to retire when she wants to.

No matter what the CARES Act did or what other people may be doing with their money right now, it’s still almost always a bad decision to withdraw from your retirement early. Just don’t do it.

You might be thinking, Well, what if I just borrow it and pay it back? No, no, no, no, NO. For real, it’s a bad idea. Don’t do it. Both withdrawing and borrowing are bad ideas, but borrowing is definitely the worse of the two. What’s another word for borrowed money? That’s right! DEBT. And that’s exactly the bad money behavior we’re aiming to change. But just so we’re clear on why you don’t want to borrow from your 401(k), let’s walk through it.

When you borrow from your 401(k), you’re taking money out of your retirement and paying it back with interest. Most plans let you borrow about half your retirement account’s value, up to $50,000. You may have heard that borrowing from your 401(k) is an easy way to get cash flow (it’s not) or that it can be used like savings (it can’t). So, you may be asking yourself, Well, if I’m borrowing from myself, is it really considered debt? Let’s look at an example to answer that question.

Jim is 40 years old and making about $50,000 per year with $50,000 in his 401(k). He’s been concerned about his job because a few of his coworkers have gotten sick during the pandemic. He’s afraid his company will have to temporarily shut down, and he works in accounts payable. So, he’s seen the numbers and knows the business can’t handle that. Just to be safe, he decides to borrow $10,000 at 6% interest from his retirement while things are up in the air. After all, he’s got mouths to feed at home. To make room for his loan payment, Jim lowers his regular contribution from $625 to $432 and keeps getting the company’s 5% match.

Another important thing to consider, especially right now, is that if you leave a company or get laid off while having a loan out on your 401(k), the balance of that loan is due within 60 days. If you fail to pay it back in that time, it will go down as an early withdrawal and be subject to heavy taxes and penalties. And 86% of workers who leave their job with an outstanding 401(k) loan balance end up defaulting on those loans too2.  So, it’s just a really, really bad idea.

The “Should I withdraw from my 401(k)?” question has been put to bed, don’t you think? But what about beyond that? It can be so hard to know which direction is true north in a time like this. So, for starters, it’s important to remember that debt is the enemy here. Any time Murphy (emergencies, accidents, problems, global pandemics that scare the living daylights out of entire countries) comes a-knockin’, you need to get more dialed in about following the Baby Steps, not less.

Like we said when this all started flaring up back in March, if you’ve been affected either financially or medically by the pandemic, you need to take a deep breath, slow down your debt snowball, focus on your Four Walls, and pile up cash in savings. And no matter what you’re going through, stay focused. Schedule some time to make sure you’re regularly logging in to SmartDollar. Even if you’re working the plan and doing well but haven’t logged in for a while, sit down and log your progress. Once you’re logged in, watch a video for some hope and advice. Think of SmartDollar as your home base. Visiting regularly will give you encouragement and help you stay calm, cool and collected in what has been one of the biggest financial tests in generations.

You can do this!